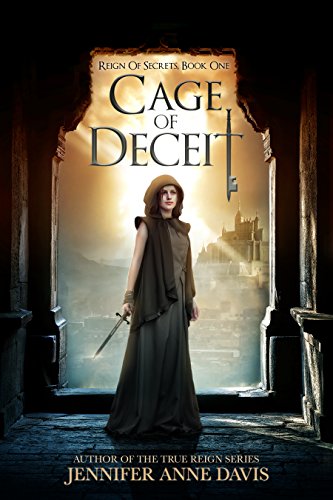 This e-book was available for free on Bookbub.

This is the first book in the Reign of Secret Series

And so I downloaded it.

In short, without copying the summary from Amazon, this book is a lovely fantasy, set in medieval times complete with royal protocol, sword wielding, hoodie wearing characters and adventure around every corner. Allyssa is the crown Empress of Emperion. At a mere sixteen years old, she’s just stepping into her role as future ruler. In a time of turmoil from an aggressive neighbouring kingdom, she soon finds herself venturing into the word of arranged marriage and personal sacrifice for the good of her kingdom. By day a lady and by night vigilante, ridding her kingdom of criminals, adventure lurks around any corner, soon turning to danger. In the change of political atmosphere, Allyssa shares her secret with…and now I will not give anything further away. It ends on a cliffhanger and I just had to read the sample on Kindle. Which did not satisfy my nagging curiosity. I want the next book as well.

What did I think about it?

I loved it. I thought the characters are lovely and diverse. Allyssa definitely answered my own tomboy and rebellious tendencies. I shared her frustrations and revelled in her self-induced freedom. Add to that her friends, and then her future responsibilities, and I can’t help but be grateful that I am not in her shoes.

When certain trouble hit, I couldn’t put the book down. I think my anxiety was as palpable as hers and then having to still keep up the front, was intense.

The writer did a great job allowing me to build the world in my imagination. She also managed to introduce the customs of society through the interaction with other characters and the situations she created for them. It might not necessarily be a book filled with dragons and magic, sorcerers or alternative realms but it has magic and allure of its own kind.

I, therefore, give it my stamp of approval to this book as a great option for young adventurers to any reader to the age of infinity!

Where to learn more about the writer and this book?

You can find Jennifer Anne Davis on her website and most social media platforms. Especially Twitter and Instagram where I spend way too much time! She has quite a few books available on Amazon. Among others her True Reign Series and her Order of Krigers Series. The Book Filled Day wrote a beautiful review as well as Elizabeth Wheatley. Goodreads has a whole bunch of reviews as well.

Please leave a comment. I love hearing your experiences and opinions. Cancel reply